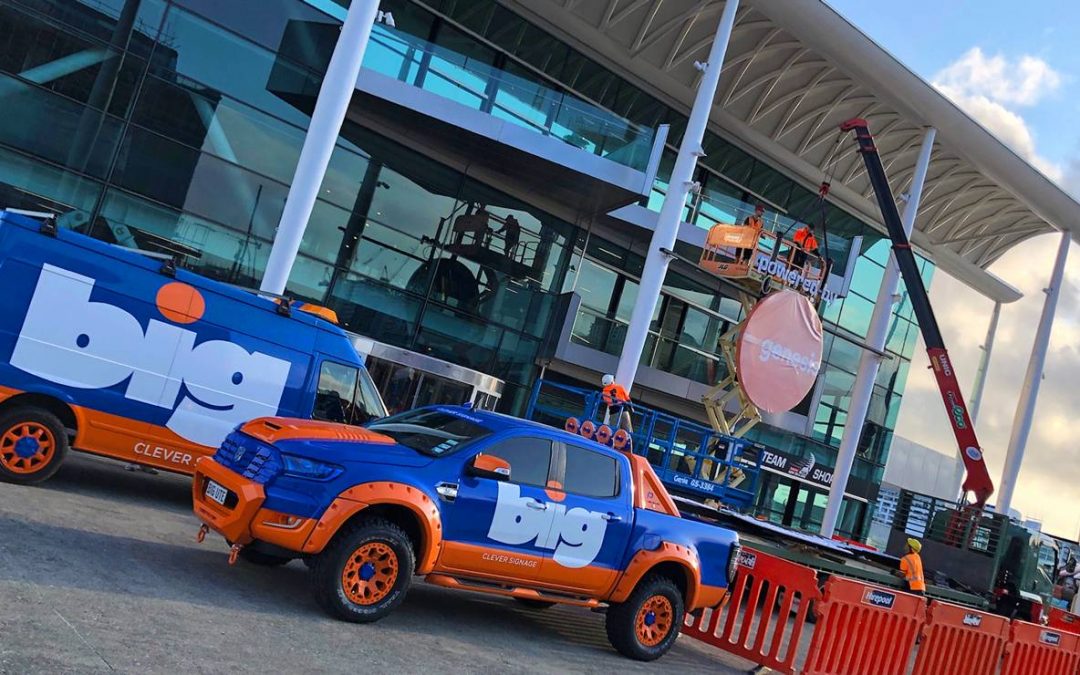 The home for the Defenders of the 36th America’s Cup, 2021 – Emirates Team New Zealand. Base signage is produced by Big Ideas Group, Official Suppliers.

Our BIG team has been working hard on producing the Emirates Team New Zealand base branding, located at the heart of Auckland’s Viaduct Harbour. The site’s official launch will happen later this year.

The building has excellent visibility from all sides. The signage has varying requirements, whether for security and confidentiality, or high-end brand exposure for exclusive suppliers. What was once a glass events centre is now a glorified boat shed and home of the esteemed team.

The greatest feat was producing the enormous “Emirates Team New Zealand base” and Genesis illuminated signs at the front of the building. BIG wired it all up at their workshop and then transported it to the site. Light sensors enable the LED signs to come on at sundown and turn off at sunup.

BIG proudly adheres completely to health and safety compliance. We took care of all precautions and consents. This alone was about an eight-month process, with understandably a lot of red tape to work through.

Graphics were printed on twelve-metre drops of sandblasted film. Applying the vinyl to the Emirates Team New Zealand base was difficult in some areas due to the complex architecture and surrounding containers. Space was tight between the windows and air conditioning piping which measured about two metres in diameter. Applying large format digital prints to the windows proved to be a challenge with minimal room to manoeuvre. Access to the building was provided with two different sized boom lifts, and a scissor lift for the illuminated signs.

Even though we printed enough kilometres of frosted vinyl to extended more than four times across the Auckland Harbour Bridge, we firmly attest that paint is not dead. Check out the father-son duo demonstrating one of their many talents: hand-brushed lettering.

Wait ’til you see what we’ve done with the race boat design! But for now, have a look at what we produced for the last campaign. 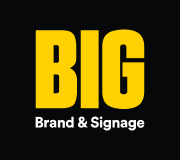 It’s in the name. We take big ideas and produce signage that makes an impact.

Our experienced design department knows the best advantages for each signage option and will manage the project for you from design through to signage production and installation. 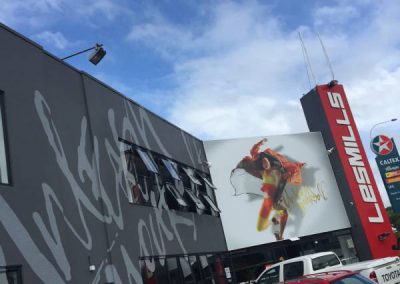 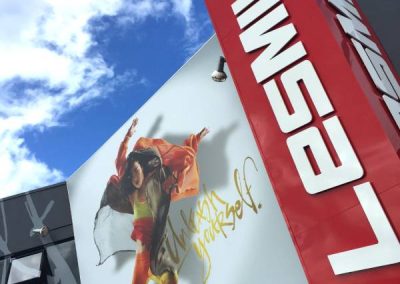 These type of signs are a great option for extra large signage. This option gives you the brightest form of light transmission available in illuminated signs. 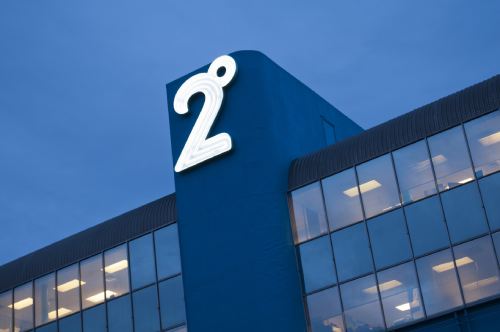 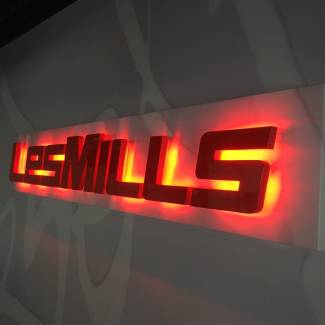 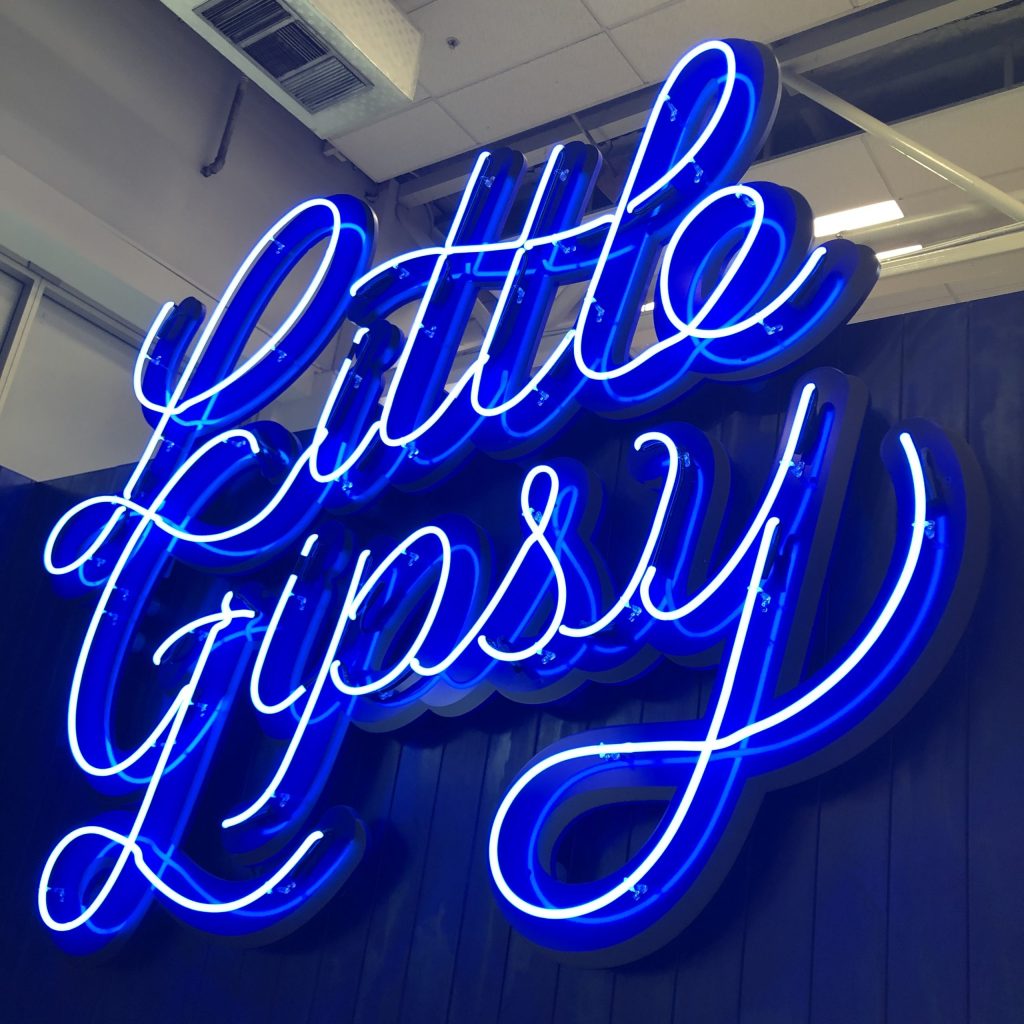 LED is the preferred option in illuminated signage today because of its low power consumption running 12-volt power supply. LEDs have proven to be long lasting and maintenance free. Because of the multi directional light source LEDs allow a thinner construction of lightboxes and acrylic faced channel letters.

Because of its electronic nature, LEDs can be programmed for colour change, fading colours, and unique sequences that will attract the eye.

There are no limits to what can be achieved using LED technology, but our most common application is illuminated signage fabricated to create face-lit or halo-lit letters and logos.

Fluorescent tube lightboxes make an extremely even illumination on any sign face. This fabrication method has been the industry standard for many years and has proven to still be one of the favored choices of illumination.

Illuminated signage can be fabricated in many different forms from double sided under veranda retail signs to double sided tavern signs through to large sky signage. Illumination is your 24 hour visual option.

We can mould and form acrylic to almost any shape and create stunning 3D illuminated signs.

Illumination has many different aspects and has unlimited uses such as art sculpture forms, furniture, accenting artwork, funky architectural effects in the home or the office, under car lighting, special effects in the marine sector and set designs.

We offer a preventative maintenance program on all forms of illuminated signage. 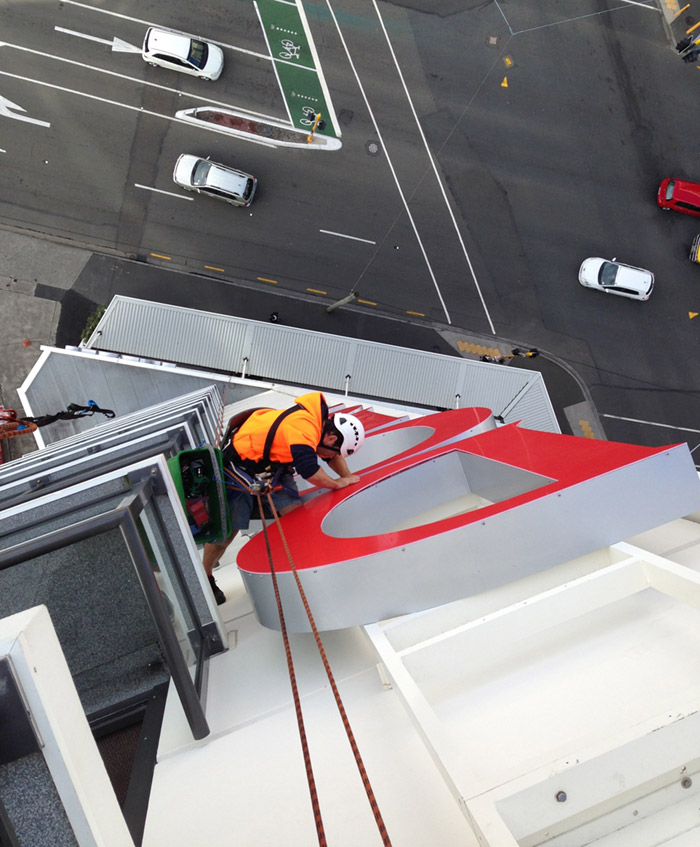 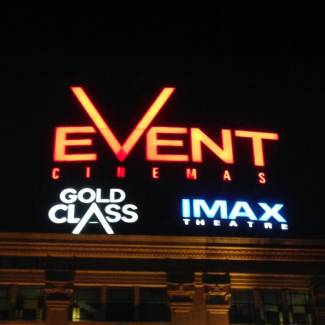 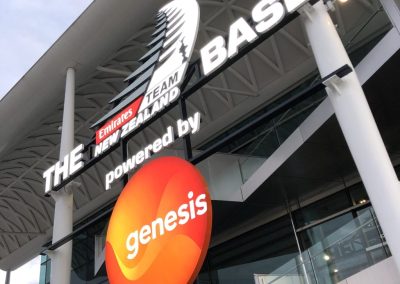 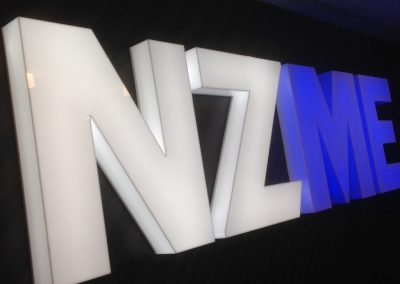 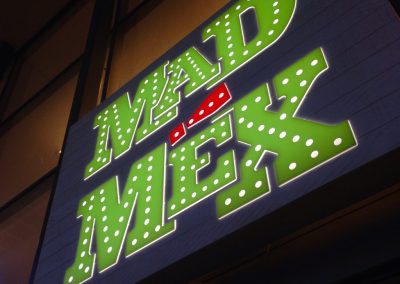 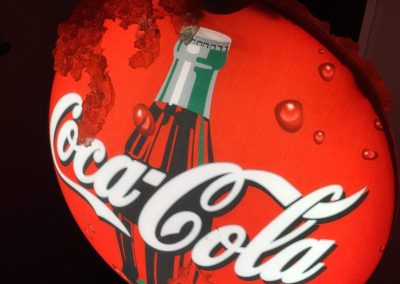 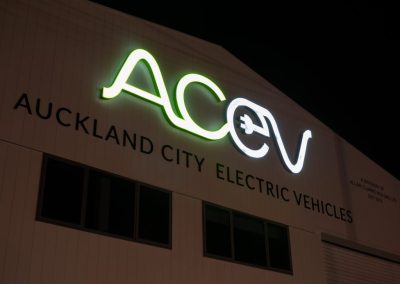 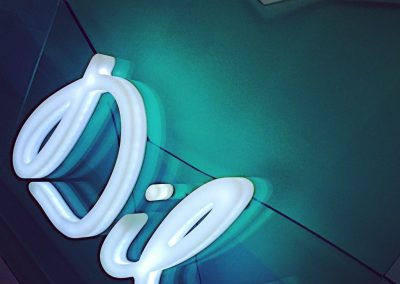 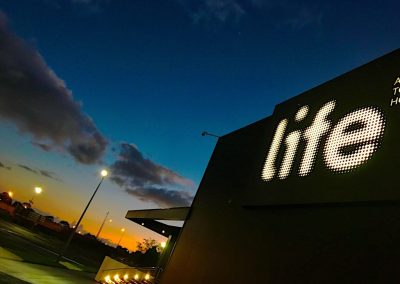 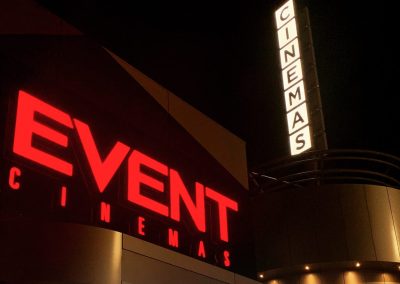 Detailed Simplicity
Peter’s mastery of modelling created a file that the students then worked on to make print ready. Hundreds of hours of processing later, the printed sign was handed to us to make the finishing touches.

With all the technology used to create the pieces thus far, it was finished by hand. An airbrush was used to blend the final colours, adding depth to the colour by applying seven coats of 2-pot clear. The addition of LEDs to the number ‘2’ was another unique attribute of the art piece. This is powered conveniently by cell phone batteries — producing illumination for approximately 30 minutes before needing to be recharging.

Roadside plinth signage
These signs usually require structural engineers reports and council permits to install as they are positioned where multiple services are located on the front verge of the property.

Our project manager will arrange for all of the structural engineer reports and council permits.

Event and Exhibition Signage and Banners

Fly eye catching flags in the shape of teardrops, wings and windblades. We have a large range of outdoor pull-up banners, fully branded marquees and printed gazebos, ideal for events, exhibitions and trade shows.

Corflute signage is an easy, cost-effective way to create a presence at any event or promotional expo. Because of it’s hardy structure and light weight properties, corflute is a preferred option for promotional signage.

Don’t just put a sign up outside and open the doors – set a scene with digital sign printing!

If you’re selling mountain bikes, draw some emotion from your customers with large format digital prints adhered to your walls to move your customer from thinking, “I’d like that bike” to “I’ve always wanted to ride a trail like that, today’s the day and this bike is perfect!”

Make use of blank office walls and empty retail floor space, with high quality digital prints to create an environment that excites your customers and welcomes your staff the minute they walk through the door!

Window signage presents a fantastic signage and branding opportunity, and with digital sign printing we can unleash the full creative potential of colour and different vinyl combinations.

Patterned frosted films – Take frosted film to the next level with electro-cut patterns on various frostings and vinyls, and combine with digital print for extra creativity.

Window frosting – We can install frosted film or vision strip to meet OHS guidelines and create privacy in offices. Choose from a wide range of colours and textures.

We’ve even created video-based window signage – so talk to us about what you want to achieve with your window signs!

As well as full service large format digital printing, we can digitally print business cards, stationery and flyers, A0 plus posters, wall graphics, window graphics and point of sale material to support your campaigns.

A wide variety of different textures, transparency and patterns are available as an off the shelf option to create the sandblasted look of glass. These films are available in PVC free materials which support green star buildings and sustainability. The effects that can be achieved from double layering and vector cut logos or shapes become outstanding features of your interior fit-out in your home or office.

With our wide range of materials and our design culture, your health and safety decal can look fun and funky and will meet OSH requirements. 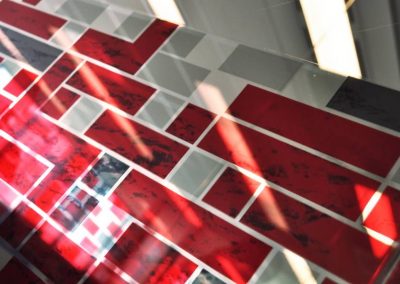 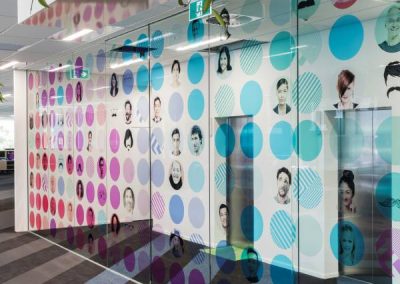 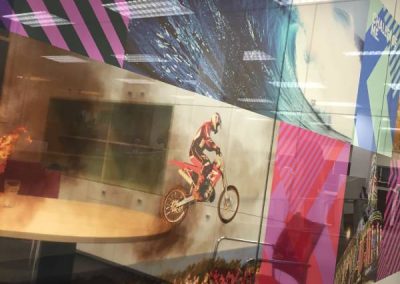 The most common method of producing 3D signs for interior or low-level exterior use is to router or laser cut your logo or company name from a chosen material. To create this 3D signage we use a CNC flatbed router or laser cutter.

Your choice of material is endless, but typically we use materials such as acrylic (Perspex), Signex, ACM or metals such as aluminium or stainless steel. These substrates range in thickness from about 4mm to 25mm and allow for different depth 3D lettering.

We can create a range of finishes for your laser cut signage or CNC sign by painting the back of clear acrylic or using brushed or polished stainless steel. Tell us about the look you’re going for! 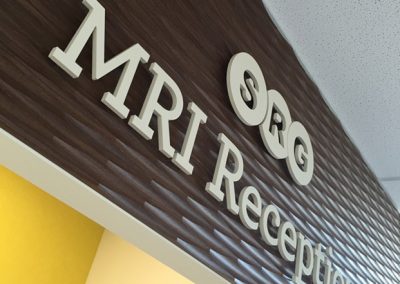 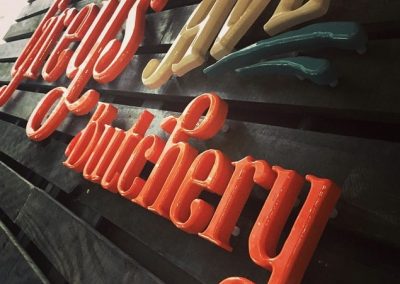 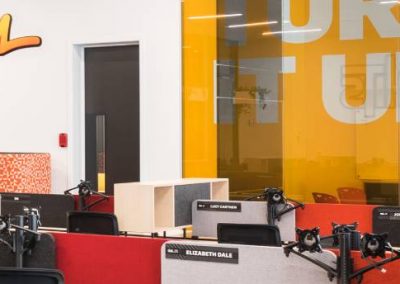 The key to any effective vehicle signage campaign is a well thought out design that will deliver a return on investment. Our design studio specialises in designing HIGH IMPACT vehicle signage that will get noticed and clearly communicate your brand and message. All we need is your logo and supporting brand artwork as well as an image of your company car model/s.

Your company car will become a mobile billboard with a complete digital wrap.

We’ll manage the roll out of your fleet vehicle signage nationwide and take the hassle off your desk.

Quality control is all part of the service. We have extensive experience in managing nationwide fleet roll outs, and processes refined over years of experience which enable us to operate as a one-stop-nationwide signage shop.

We’ll produce a design library of all your various vehicles and divisions, provide a clear pricing structure and manage every single vehicle that requires branding. We’ll even send you photos once the signwriting work is complete.

You might have a fleet of vehicles on loan for a special event or perhaps you’re working on a project that has a promotional life of 3-6 months that requires vehicle branding and promotion.

Either way, we have a range of signage products that are cost-effective and easy to remove for 6 month promotional events or just a weekend event.

We can image trucks as easily as any other vehicle. Permanent or promotional signage can be applied to hard-sided truck-and-trailer units or flexi-curtains. Use your trucks assets as moving advertising billboard.

One of the questions we are asked on a regular basis is “how easy is it to remove graphics”? It’s not an exact science, but generally the vinyl signage we work with today is designed so that in 5 years time graphics can be removed without any damage to the paintwork underneath. 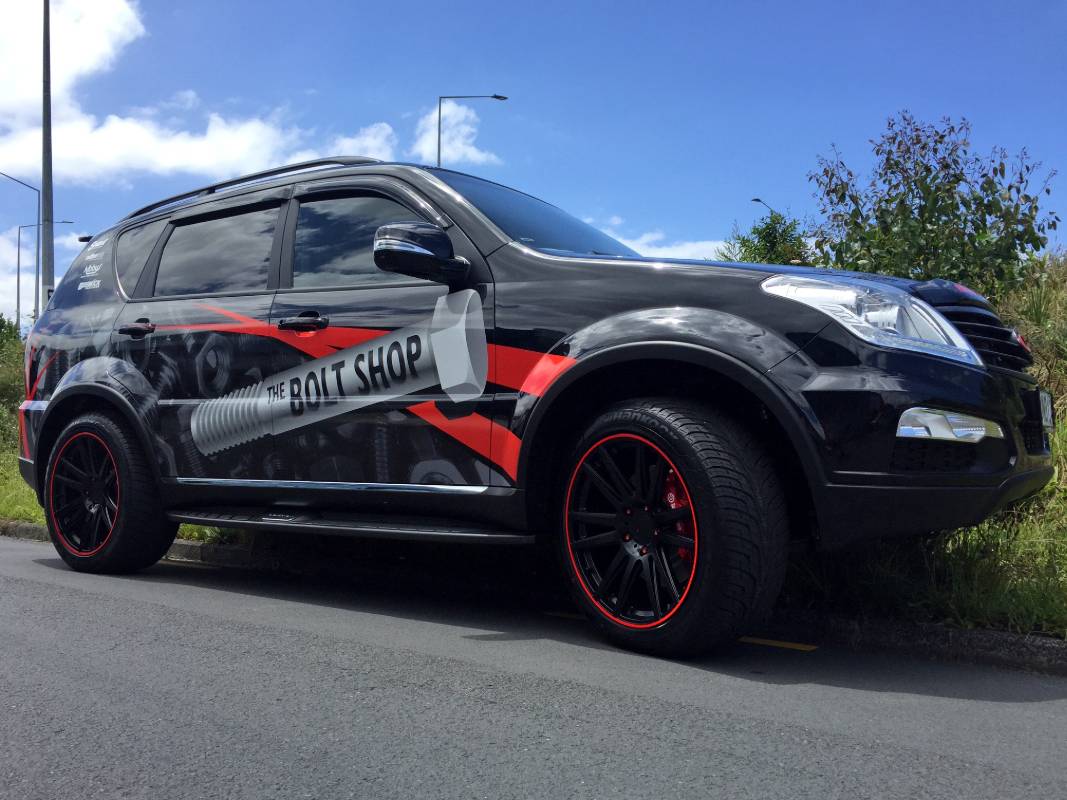 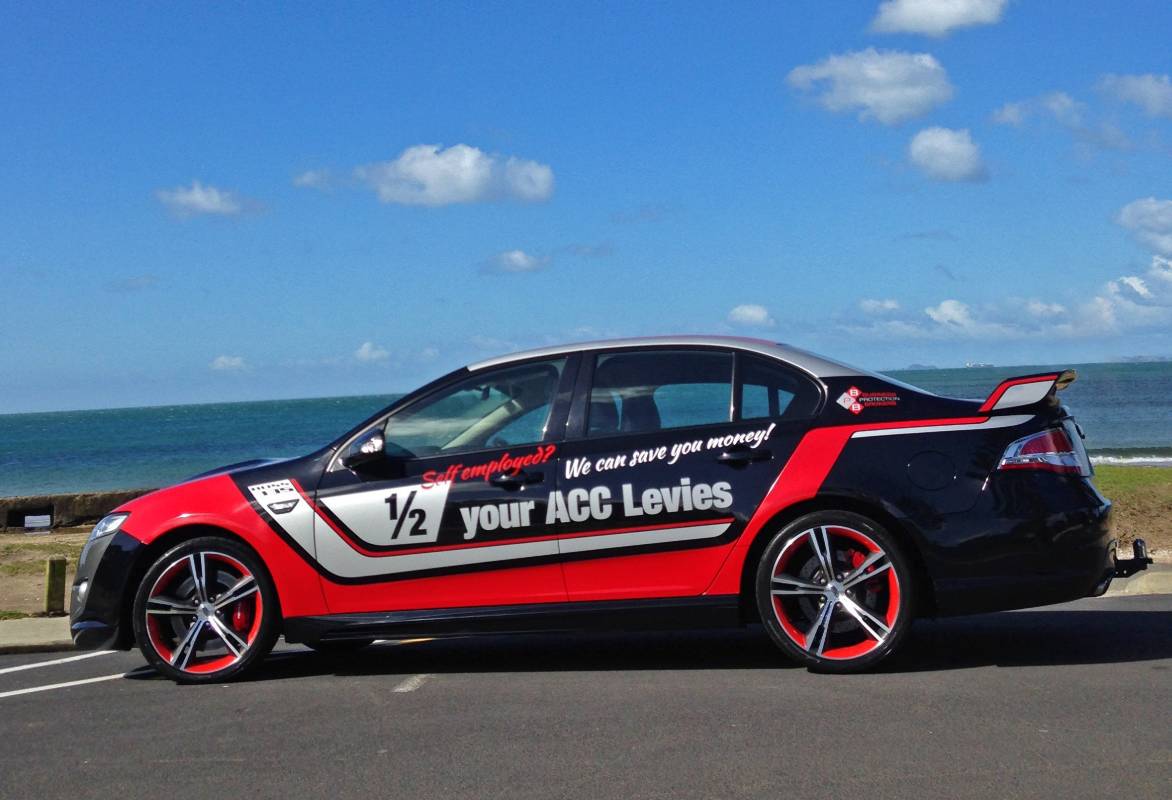 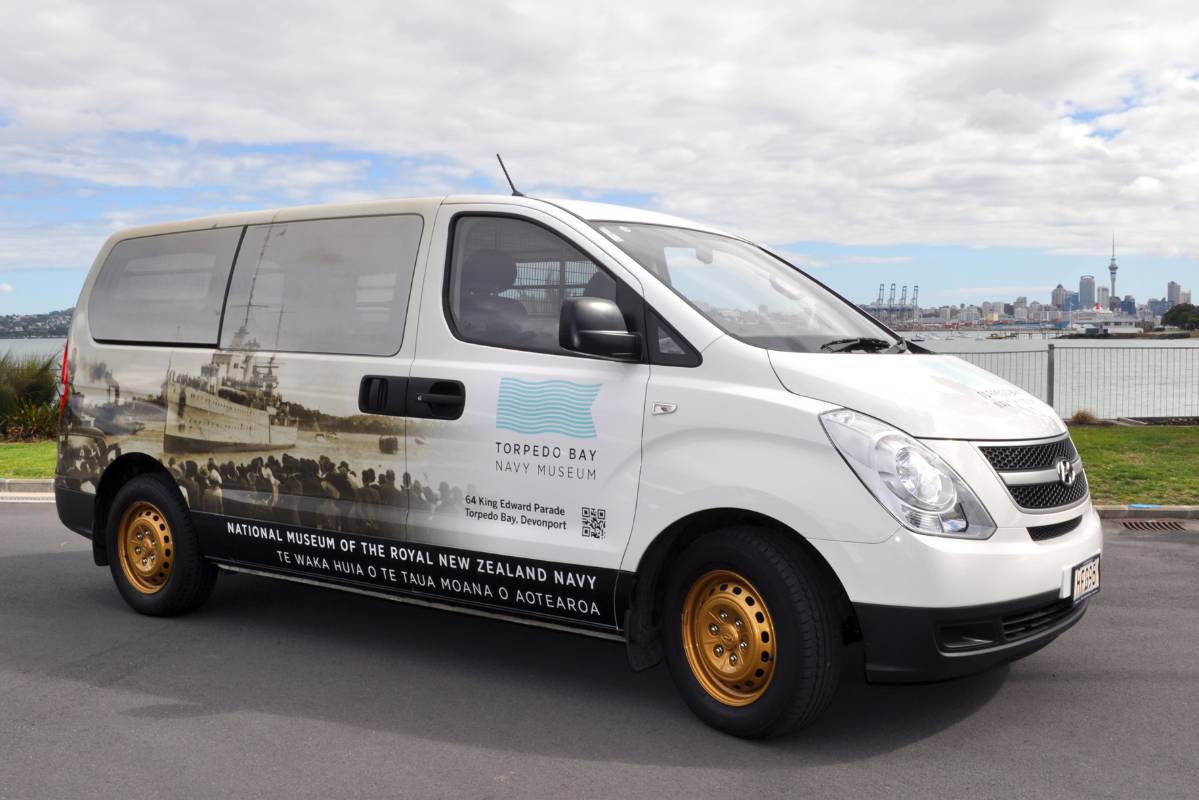 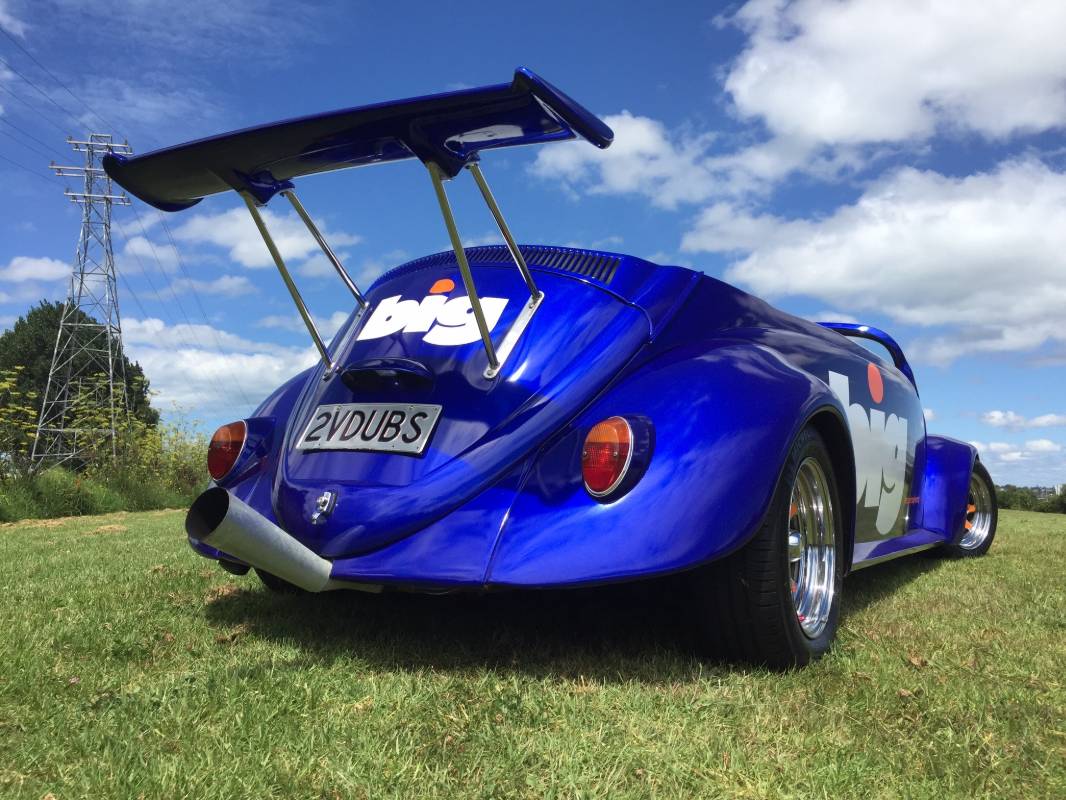 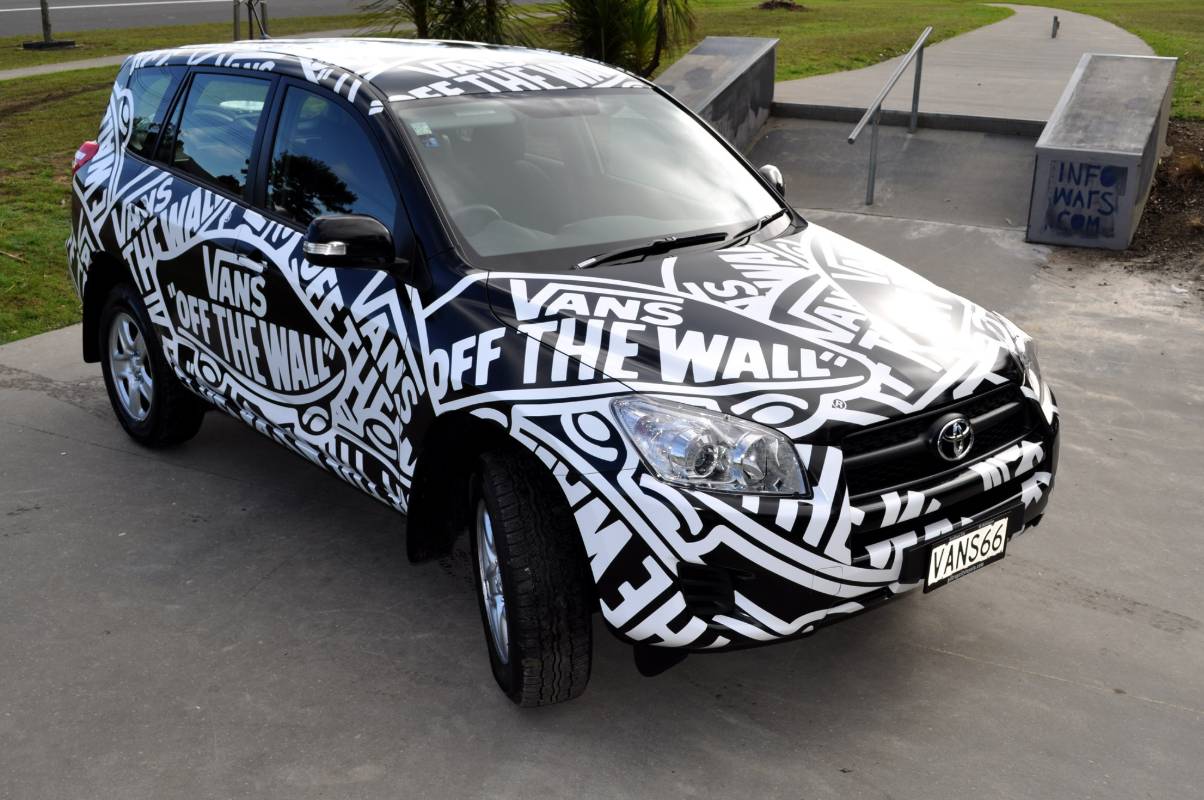